Another iOS update, another batch of issues: Our advice

iOS 11 is the latest update from the California Company, and as no software is perfect just yet in today’s age – some glitches and issues have come along with this update, but we have some advice/tips for you.

1.    The most known and experienced complaint with new software update is that it has slowed down older generation iPhones - iPhones 6S and old variants to be specific. You will have heard about Apple actually admitting to slowing down older devices, to which they began offering discounted battery replacements (they say this is a fix and will regain your iPhones previous performance.) Upgrading to the iOS 11.3 software will give you the option to disable performance throttling however, so you can go about eradicating this issue with those two options.

2.    Another issue some users are experiencing is conversations are not in the right places. Message conversations will appear in random orders, not related to date sent/received - an annoying bug that can be fixed by updating to at least 11.2.5.

3.    Battery life has always been a victim to new iOS updates, and this one appears no different. Many users are complaining that their battery life has been severely impacted, and there are plenty of reasons as to why this could be happening. iOS 11 has disagreed with a few apps, so this could be one reason - check to see which apps are using the most power by going into Settings > Battery, and if you can identify some apps you don’t really use maybe disable them until future updates. Other suggestions for power-draining iPhones are to reduce brightness, turn off GPS, turn off Bluetooth or disable apps refreshing in the background.

4.    The next problem some users are reporting is the Power button not working either during or after the update to iOS 11. You can however shutdown your device via the menus - go to Setting > General and scroll down to the bottom where the option "Shut Down" is. This is actually a useful tip, as if for any reason you can’t press the button or it has broken etc. you can use this method.

5.    Music controls have been reported to be missing from the lock screen for a number of users, meaning the inability to pause, switch off change volume on the lock screen. If you are experiencing this issue just update to iOS 11.2 where Apple have resolved this issue.

6.    The Control Center has been said to not actually be turning off Wi-Fi or Bluetooth in some circumstances. If you want to turn wither of these off you'll just swipe up and disable them via the Control Center right? Well, it may take you off the Wi-Fi or Bluetooth you were currently connected to, but they will actually still be ON looking for other networks/devices - meaning you're still using power for these features. To fully turn these off, you'll need to go into Settings directly and turn them off here - with the iOS 11.2 update though, the Control Center make it clear they don’t fully turn off Wi-Fi/Bluetooth.

7.    If you've had the unfortunate luck of finding your iPhone/iDevice won’t start at all after the update - fearing you've lost all your previous photos/conversations/memories - don't worry, you can simply restore from a previous backup or if you've not done that smart move, restore to factory settings... 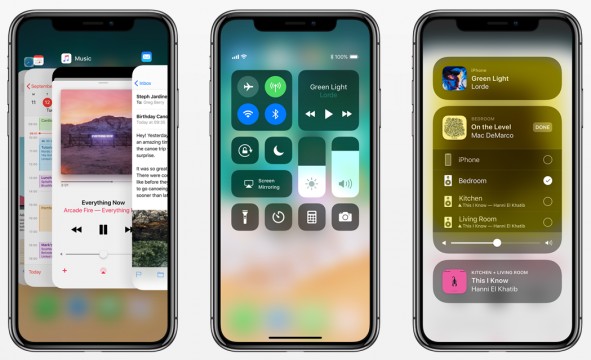