The tech giants Samsung announced a truly massive 146-inch (396cm) TV at the CES tech show in Las Vegas, which features a micro-LED display which they say is a superior alternative to OLED as it offers both deep blacks and bright highlights. But analysts have said the more likely reason would be the manufacturing costs.

The display of this mammoth screen is actually comprised of many smaller modules that are able to be arranged to form unusual dimensions – as a super-wide screen was briefly shown at the same presentation. Samsung say that due to this modular technology, this will allow TV’s to be customisable in size which customers can order.

The micro-LED display should allow for a bright picture without the use of a backlight, this is due to the self-emitting LED’s which are featured on the screen. Backlights can make it difficult for the screen to produce deep blacks due to their illumination spills beyond the pixels they are targeted at. The micro-LED screens are very difficult to manufacture because the LED’s have to be placed onto a layer individually by machines, says analyst Paul Gray. “You have millions for a single display.” He adds.

Mr Gray also said “maybe Samsung has made some breakthroughs on multiple placement.” And also added that although Samsung had pitched their new technology as a “consumer” product, it will realistically only appear in very expensive devices. Samsung have not revealed any pricing information as of yet.

Samsung has promised that its next generation of smart TV’s will be more intelligent than their previous gens, due to the inclusion of their own voice-activated assistant Bixby. Samsung smart TV users will then be able to view the inside of their fridge by asking Bixby, as long as they have a compatible Samsung smart fridge with an internal camera. 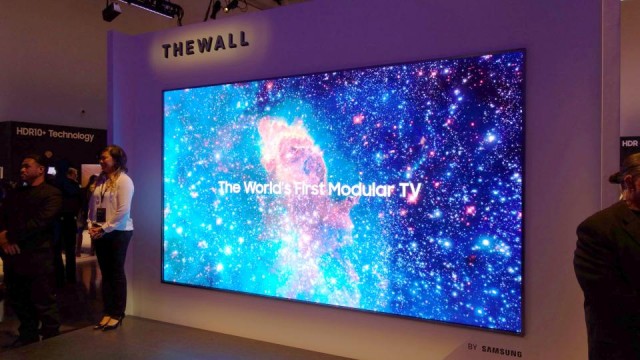